When choosing to buy salmon, there are two choices: wild-caught salmon harvested by fishermen or … END_OF_DOCUMENT_TOKEN_TO_BE_REPLACED 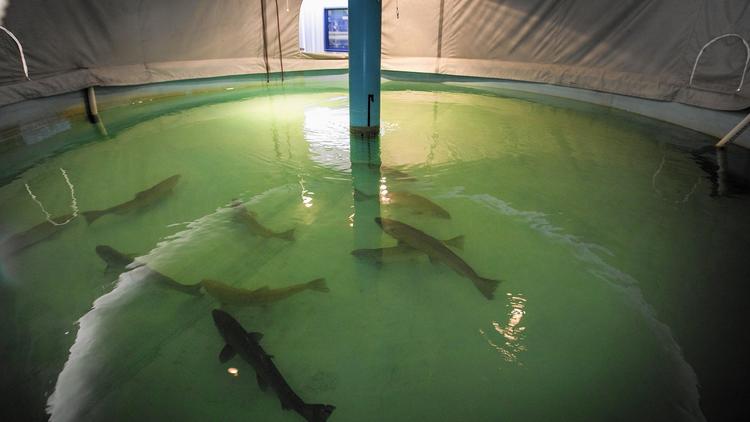 Adult winter-run salmon swim in a tank at a hatchery at the base of Shasta Dam in July. (Brian van der Brug / Los Angeles Times)

This year’s spawning season for endangered winter-run Chinook salmon is looking like another disaster, placing one of California’s most prized native fish in an even more precarious position.

The number of juveniles migrating downstream from their Sacramento River spawning grounds is lower than it was at this time last year, when virtually an entire generation of winter-run Chinook was wiped out by warm water temperatures.

————
FOR THE RECORD
11:36 a.m.: An earlier version of a photo caption accompanying this article incorrectly identified the location of the hatchery as Redding. The hatchery is at the base of Shasta Dam.
————

“This is not good news,” said Maria Rea, a regional official of the National Oceanic and Atmospheric Administration. She was not ready to declare this year a total loss, saying the count could still go up if November storms flush out juveniles holding below Shasta Dam.

Water and Power is The Times’ guide to the drought. Sign up to get the free newsletter >>

But “these numbers would have to improve very dramatically not to have a high level of concern,” said Rea, an assistant regional administrator for NOAA Fisheries.

Managers developed a risky plan this year to ration cold water releases from Shasta Dam to avoid a repeat of 2014, when they ran out of cold water late in the spawning season and only 5% of the young survived.

These numbers would have to improve very dramatically not to have a high level of concern. — Maria Rea, a regional official of the National Oceanic and Atmospheric Administration, on the low number of juvenile winter-run Chinook salmon migrating downstream from their Sacramento River spawning grounds

To stretch the cold water reserves into the fall, they had to reduce the size of releases this summer, thus raising the river temperature above the optimum for egg incubation. It was a gamble that they hoped wouldn’t exact too great a toll.

But the egg survival rate appears to have been abysmal. Only about 217,000 juveniles have been counted swimming downstream at the Red Bluff Diversion Dam, 22% less than at this time last year.

Salmon have a three-year life cycle, so two consecutive seasons of little successful reproduction makes next year critical. “We are anticipating a need to be very conservative next year with Shasta Reservoir operations in the spring and summer of 2016 in order to augment the cold water pool,” Rea said.

If 2016 is another bust, the future of the once abundant winter-run Chinook will rest on a conservation hatchery that is raising a captive brood stock at the base of Shasta Dam. The hatchery would save the species from extinction but salmon recovery efforts would suffer a huge setback.

The drought has cut flows into Shasta Lake, reducing the volume of cold water in the reservoir, the state’s largest. There have also been problems with a U.S. Bureau of Reclamation model that has miscalculated the reservoir’s cold water reserves, as well as temperature probes that have given misleading readings.

And critics contend the agency released too much water to agricultural contractors this year, depleting the cold water pool.

“The situation was entirely avoidable,” said biologist Jon Rosenfield of the Bay Institute, an environmental group. “I don’t know why — given the experience they had last year — anybody would have promised the amount of water [that contractors] were promised.”

Those irrigation districts, which have senior water rights on the Sacramento and mostly supply rice growers, did work with the reclamation bureau to change the timing and amount of their deliveries to help salmon.

“I am very grateful to the farmers,” Rea said. “They’ve been really good partners in terms of changing their operations.”

Thad Bettner, general manager of the Glenn-Colusa Irrigation District, said deliveries were 60% to 65% of the district’s contract, compared with the initial allocation of 75%. The district also delayed deliveries from Shasta so the water would be released at a time when it helped control river temperatures.

The problem is not just cold water, Bettner said. “We believe there’s inadequate spawning habitat and habitat” for the young, he said, adding that Glenn-Colusa was getting permits to improve conditions in side channels.

U.S. Bureau of Reclamation public affairs officer Shane Hunt said the agency followed the temperature control plan. But “if we had known in April what we knew in August we probably would have done things a little differently earlier in the season.”

NOAA is developing a new model that it hopes will more accurately calculate Shasta’s cold water reserves. Fiber-optic cables have also been installed behind the dam to provide better temperature data next year.

But even talk of a strong El Niño this winter is not giving managers a lot of hope, as the biggest storms are expected to hit far south of Shasta’s watershed.

This article was previously published by Los Angeles Times: http://www.latimes.com/science/la-me-salmon-count-20151029-story.html

Our dear friend, salmon warrior, and founding Board Member, Zeke Grader passed away in the late … END_OF_DOCUMENT_TOKEN_TO_BE_REPLACED